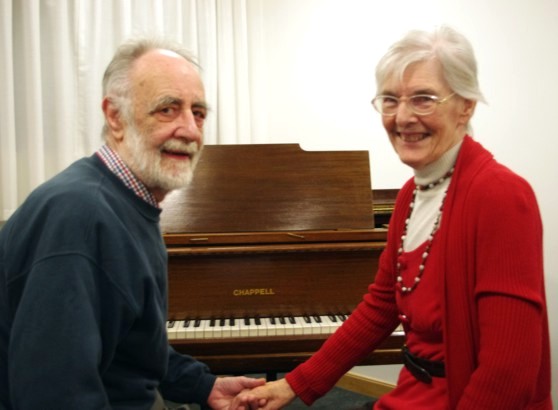 Jim and Joan Pearson. Joan was a founder member, and Jim maintained the previous website for the Alberti Piano Group which contains many live recordings from past meetings.

Background to the Alberti Piano Group

The piano group has been going for over 30 years. We started in 1983 as a weekly piano class for adults at the Manchester Adult College. Our tutor was Martin Bussey who subsequently moved to Chethams School.

About 1986 the college reorganised its syllabuses and the piano class was dropped even though it was well attended. The class members decided to ‘go it alone’. They hired a hall within the college for a year but without a tutor. They later found a studio in the then Manchester School of Music in Albert Square.

As there was no piano teacher, the students simply took each meeting as an opportunity to play to each other, and talk about the music and performances.

The outlook from the studio directly into Albert Square combined with the well known association with the Alberti bass prompted a name which has stuck ever since.

Around 1994 the Manchester School of Music changed ownership and moved away from Albert Square into premises within the Friends Meeting House. Again there was a studio and a grand piano, though the soundproofing was less than perfect.

During 2000 we swapped to fortnightly meetings, more popular with members. About the same time the Manchester School of Music moved out of the Friends Meeting House, leaving the Alberti Group again looking for premises. This time one of our members, Margaret Pollit, saved the day by booking the main hall at the Unitarian Chapel on Cross St. Here we have a Yamaha grand piano and tea/coffee facilities for chat and mingling at 4 pm.

During the period 1985 – 2012 Joan Pearson acted as Secretary. With the help of her husband, Jim, she made all the necessary arrangements — meeting dates, premises, publicity, contacts with new members, etc. Joan and Jim worked hard to develop the Group and maintain its ethos, as well as contributing strongly to the musical performances.

Over the last few years a small team of members has taken over what little management is needed. We have been well supported by friends at the Cross Street Unitarian Chapel where we have use of a Yamaha grand piano. Several of our members have contributed to the Chapel’s end-of-month lunchtime recitals.

Another development has been our hiring of a recital studio at the Royal Northern College of Music on one or two Sunday afternoons in August, at which we invite friends and family to be a small audience. Friends who play other instruments have come along to play duets with the piano, so sampling an even wider range of music for piano.

The Alberti Piano Group has the minimum of formal organisation. We focus on enjoying playing and hearing the piano.